Ask any professional chef or longtime cook what the most important tool is to have in the kitchen. Hands down the answer will be a quality, sharp knife.

A hunter will come up with the same response, behind his rifle or bow of choice, of course. As will any angler, camper, and outdoorsman–the knife and/or blade from a multi-tool is the most essential piece of equipment to have on any trip into the wild. (If you have a dull knife, find the best electric knife sharpener and honing steel for you.) 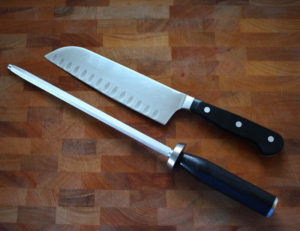 But not just any knife will do.

Chefs, hunters, and sportsmen all demand their blades to have the sharpest and most precise cutting blade possible at all times.

Unfortunately, most knife manufacturers–be it kitchen knives or outdoor tools–sacrifice quality and sharpness in favor of durability and duration of use.

These producers often design their products for the masses, not the connoisseurs, and are out to make practical and affordable products rather than those with the best performance.

The sharpness of a knife blade is very much a function of the shape of the blade and its intended cutting purpose.

A knife with an ultra-thin edge is not necessarily going to garner the best results and will likely crumble, crack, or roll when going up against a tougher product.

You should take into consideration the shape and bevel angle of a blade along with the material being cut when regarding how you judge its sharpness. 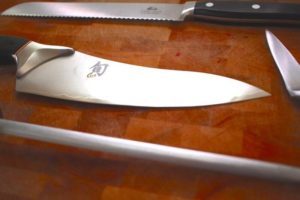 Though most knife makers make their products with thicker edges intended to last longer, thinner edges are still the better performers.

They will require less force and put less stress on the blade and the product when doing their job. This means the blade is also easier to control and less likely to degrade than thicker-edged blades, which do twice as much work and degrade twice as fast as thinner blades when cutting the same product.

Why You Need a Sharp Knife

In the kitchen, a dull knife can turn minutes worth of prep work into laborious, dangerous, and time-consuming processes. A dull blade requires more pressure to cut into food, often requiring extra hacking and sawing, and results in a mashed, bruised, and unattractive finished product.

Not to mention an unsharpened blade is more likely to slip from the skin of an onion, or the bone when butchering a fresh kill, and slice into your fingers–a most unsavory experience for both you and your food.

At a minimum, a knife that sees a good amount of daily usage should be properly sharpened at least a few times a year. Knife connoisseurs that use their tools on a daily basis should consider more frequent maintenance.

It’s really quite simple to test the sharpness of a blade and get a sense of its ability to perform as intended. In the kitchen, you can test your blade’s sharpness next time you are preparing your favorite recipe.

The knife should be able to cleanly slice into tomatoes, onions, and mushrooms with little to no force or motion. Essentially, the shape and edge of a blade should do the work for you when cutting and glide straight through the product.

Testing the Sharpness of Your Knife

There are several common tests you can experiment with to test a blade’s sharpness using materials around the house–and some with no materials at all.

Most people have seen or tried the paper test, wherein you take a blade directly to the edge of a sheet of paper and try to slice cleanly through it.

A dull knife will slide to either side of the paper or make an awkward rip or tear into the paper’s edge. You can cake this a step further by using magazine paper, which is thin and slick and can be difficult for dull knives to cut. Take the magazine paper, round it in half, and slice downward.

The paper should slice evenly and you should be able to shave out a section of the halved paper.

The arm hair test is simple way to test the sharpness of your knife without anything except your own body hair.

All you have to do is run a knife parallel to your arm along with the hair above the skin. Sharp knives will knick the hairs off as it passes along, a dull blade will simply bend them over and push past.

This test can be dangerous for less even-handed individuals and can result in awkward patches of trimmed hair on your arms (or legs).

The thumbnail test can be difficult to master but is a way to determine whether or not your blade is subject to small chips on the surface.

Simply run the blade back and forth along surface or the thumbnail or along the edge of your wetted thumbnail. A knife with a dull blade or verging toward dullness will catch on the surface of your thumbnail and indicate the need for sharpening.

The sight test is reserved for seasoned knife users and sharpeners who can spot a sharp knife simply by looking at it.

When looking directly at the edge of a knife, a sharp blade will be thin and nearly invisible, while a dull edge will reflect a glint, especially when held under a bright light. Knicks and rolls in a dulled blade’s edge will also reflect and be visible under light.

Ultimately still, the best way to test the sharpness of a knife is directly on the product or material you intent to cut, slice, or dice. Kitchen knife makers have found the onion to be the ultimate test of a sharp blade, since its outer skin can be quite slick and loose.

A truly fine and sharp knife will immediately penetrate the skin and catch the surface of the onions outer layer on its first pass, while a dull knife is liable to slip off onto your awaiting fingers.

A sharp knife will also be able to easily trim to tops off carrots and other root vegetables by holding them and slicing through the air.

Filet and skinning knives should be able to cleanly cut and make quick work of fish and game flesh without excessive sawing.

Pocket and survival knives taken on camping trips or extended backpacking excursions should be able to chop small branches, slice open food packages, assist in first aid, and perform any other task thrown at them seamlessly and precisely. Knives are often the most important tool in many trades and hobbies and therefore are often seen as extensions of the hand that should be cared for as such.

To keep a blade sharp and performing at its best it should be properly stored with the blade covered in a clean and dry environment free of other clutter. You never know when your knife may save your life–or at least the look of your holiday dinner—so make sure its well-maintained and sharp.