People used to think that making musubi and sushi in their homes was an impossibly complicated task. Who can blame them, after seeing sushi being made with a rolling mat by professionals?

Oh, by the way: for the uninitiated, musubi is a snack or lunch food made of a block of rice and wrapped in nori sheet, a black seaweed paper. Ingredients like salmon, tuna, and pickled plum are usually placed on top of, or inserted into, the rice.

Musubi, like sushi, used to be made by using a rolling mat or an improvised mold.

A musubi maker does away with the rolling mat and, therefore, the complex process that assembling sushi used to prove to be.

In a hurry? Here’s our favorite musubi maker from Amazon.

Is Musubi Japanese or Hawaiian?

Musubi is the same thing as onigiri, a Japanese food invention. In Japan, the preferred term varies depending on the region or even household in which it is being eaten. Musubi (omosubi) has a long history in Japan that dates back to the 11th century.

Musubi is believed to have originated from Japan due to the nature of the Japanese rice, which is slightly sticky, used in making it.

It is compacted rice that is molded by hand into a triangle, square, or other shape.

The popular Spam musubi from Hawaii uses a slice of the meat on top of a block of steamed rice.

The literal meaning of onigiri in Japanese means “to hold or grasp something”. That is what musubi, an onigiri adaptation, is. It is the ultimate convenient, tasty, and eat-anywhere snack.

History of Spam Musubi in Hawaii

Following the Japanese attack on Pearl Harbor on December 7, 1941, the United States imprisoned more than 120,000 people of Japanese descent who were living on the mainland. They were put in internment camps scattered all over various states.

Many Japanese citizens had no choice but to flee the mainland to avoid being caught. Some of them found their way to Hawaii. The island already had a significant ethnic Japanese population by then. The first group of Japanese originally arrived in Hawaii in 1885 as laborers in its pineapple and sugar cane plantations.

Also at that point, the US had a strong military presence in Asia and the Pacific that was based in Hawaii.

The new food Spam became a regular part of G.I. rations at the military base, and the convenient meat product eventually was made available to the locals as well.

Due to a strong Japanese influence in Hawaii’s cuisine, the locals were able to craft a dish in which Spam was topped upon the traditional Japanese snack called onigiri.

The simple dish that the locals created is the forerunner of what we know now as Spam musubi. Today, it is sold everywhere on the island, from convenience stores to fine dining restaurants.

How to Make Spam Musubi

You will also need a musubi maker or mold. Once you have this, it will be very easy to assemble the musubi.

What are Some Other Varieties of Musubi?

You can use just about anything to top the rice in musubi, and then wrap it with nori.

The more popular ingredients that can be used aside from Spam include fish, chicken, scrambled egg, hot dogs, and tuna salad.

There are limitless possibilities: you just need to use your imagination. I have seen musubi with braised beef and ginger being served in some fusion restaurants. There is also such a thing as vegan musubi that has black hijiki seaweed, tofu, and shiitake mushrooms for the ingredients.

If you want to go minimalist, you can do so by having your musubi go without any topping. Simply sprinkle the rice with furikake or umeboshi sour pickled plum.

Musubi can be molded into triangles, squares, balls, or barrel shapes. There are even those that are shaped like stars or even hearts. 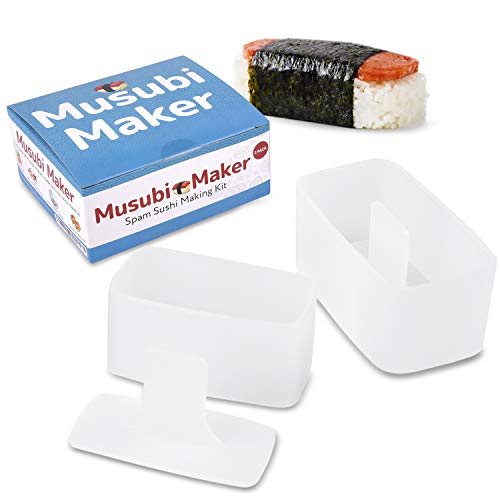 There’s no reason to pay for expensive musubi when you can easily make it at home using this musubi maker press. It is simple to use even for first-time users, but it can produce professional-grade musubi every time.

This musubi press can be used for other types of sushi and their Korean counterparts Kimbab and Gimbap as well. It flattens the rice nicely to give your dish a more professional touch.

When you buy this product, you will be getting two quality kits. They are BPA free, won’t stick to the rice, and are easy to clean.

The kits do not come with instructions, but maybe that’s because it is so simple to figure out how to use them. 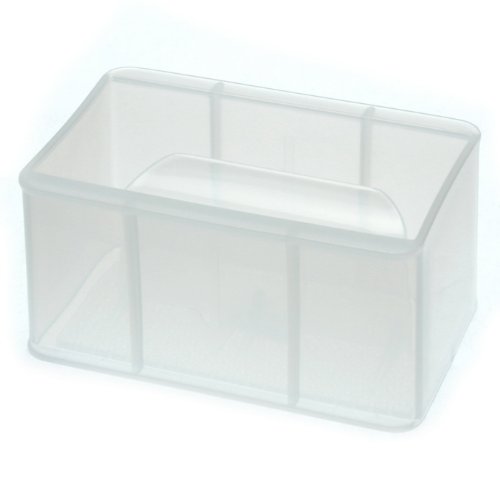 Aside from being affordable, what I like about this musubi mold is its size. It is perfect to use on a half sheet of nori. Two musubi from one sheet are just perfect.

The rice does not stick to the sides, and it comes out from the mold perfectly every time. It can also be used to make hakozushi, which is a square form of nigiri sushi.

The Kotobuki musubi mold is dishwasher safe. It can be washed easily on its top shelf.

It looks a bit flimsier than other musubi makers, but only time will tell if it will last. Its price and the fact that it can make a perfect musubi, though, make it a must-buy.

This musubi rice press lets you create the perfect musubi in a foolproof way. It is made of clear plastic to let you see inside while assembling the musubi. You will know if you need to add more rice or if it is compact enough.

The product comes with a 3-step instruction for first-time users. It is very easy to press the rice, so it keeps a rectangular shape. It is not non-stick enough, though, since morsels of rice can sometimes stick to the surface. 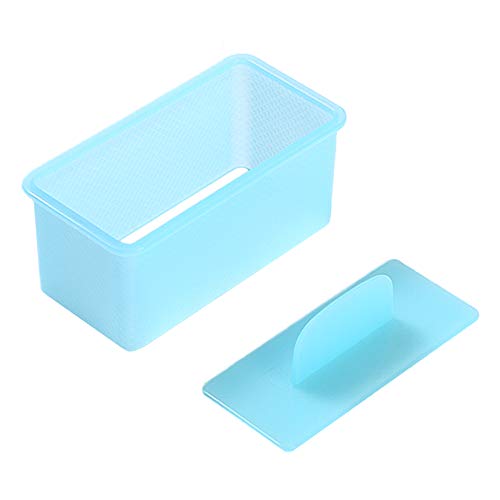 This is a premium musubi maker at a very affordable price. Its bumpy surface design ensures that the rice will not stick to the mold. It also releases the molded rice easily.

Due to the non-stick surface, it is easy to clean. It is not suitable for the dishwasher, but washing it by hand is easy. Its small size makes it convenient to store in even the tiniest kitchen drawer.

The curved corner gives the sushi a better shape and structure. It is great for making Spam musubi, onigiri, sekirei, and kimbab. 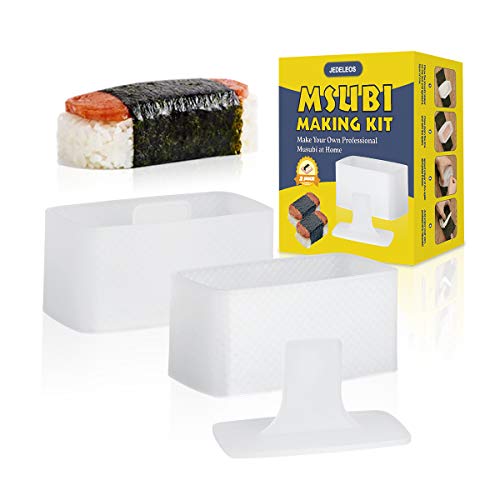 This is another musubi press that comes in a two-piece pack. In just three simple steps, you can make your musubi at home with the help of this mold.

It has rounded edges, just as Spam has. I noticed, though, that it is slightly larger than Spam–but your Spam musubi will still look amazing.

There is no more need to buy expensive musubi or sushi when you can make it at home. With this musubi maker, it is easier than it looks. 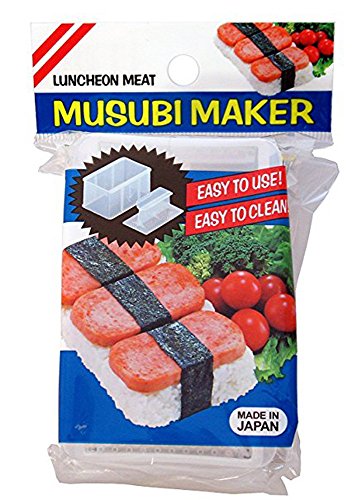 This clear acrylic spam musubi maker lets you see through the mold. It makes assembling much easier, since you can readily see how your musubi is shaping up.

Acrylic is a food-safe plastic. It is also easy to clean.

The nonstick surface ensures your molded rice will press right out of the mold intact and easily.

This musubi press works great, but it doesn’t have rounded corners as Spam does. It should also be a bit smaller. Spam slices shrink after being cooked and the block of rice becomes larger than them. 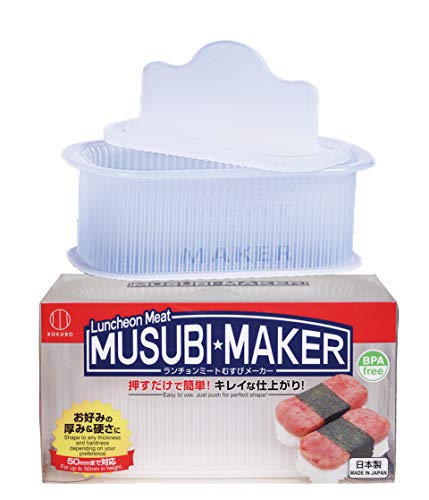 The Happy Sales musubi maker press comes in two molds but in two different sizes. The smaller one is perfect for a snack-sized musubi while the larger one is the standard size of musubi sold in Japan.

The molds have a “release button” that is intended to push the formed rice from the bottom of the mold. It doesn’t look like the button will hold up to repeated use but maybe if you will be careful in pressing it and help it along with a very light shaking, it might. 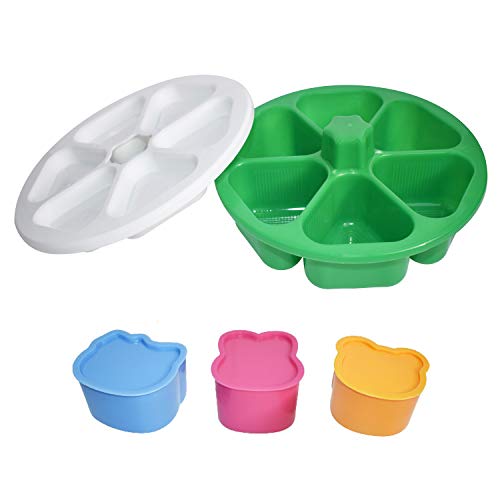 If you find using the regular musubi maker a bit time-consuming, this onigiri mold triangle/musubi maker may be what you need. This can quickly mold 6 triangle musubi at once.

You will receive upon purchase three sets of cute animal sushi cutter molds as freebies. You can surprise your family and friends with uniquely shaped sushi at home.

All the molds come in an anti-sticking strip design that is easy to clean and suitable for dishwashers.

The instructions come in Japanese but with no English translations. It would be easier for first time users if they included English instructions as well.

There you have it: our list of the best musubi makers to buy, with reviews.

In the past, some people used to just make use of the Spam can as their musubi mold. However, that doesn’t make perfect musubi, and with the sharp edges of the Spam can, it’s not exactly the safest thing to do.

If you want to try forming musubi using the Spam can, then firstly, you need to clean and dry the can. Then, cut off the bottom part of the can. Some users tape the sharp edges to prevent injury. Use the can itself to press the rice, Spam, and any other ingredients.

It’s difficult to get the finished product out whole, though, and the whole process is just too complicated.

Just eliminate all the guesswork by using a musubi maker!

It doesn’t cost much to get one. Best of all, you will be getting fresh and professionally-made looking musubi in no time at all.

What is a musubi maker?

A musubi maker is a press used to compress rice when assembling musubi to form a rice block. It comes in two parts: the shaper and the compressor.

The shaper is the box-shaped piece which you fill with rice. The compressor is the flat piece that usually has a knob on top. It is used to press down the rice to make it more compact and even.

Do you need to refrigerate Spam musubi?

Musubi is best eaten fresh, but if for some reason it cannot be consumed immediately, you should wrap it in a plastic wrap. If it needs to be stored longer, it is best to keep it in the refrigerator.

Rice and nori do not do well when refrigerated. Microwaving them properly will bring rice back to life, but there’s not very much hope for the nori. It will turn soggy, whether you microwave it or not.

I suggest that you just wrap the rice and Spam in the plastic wrap without the nori before putting it in the refrigerator. When it is time for you to eat it, microwave it for maybe around 30 seconds. Then put the nori on it again. 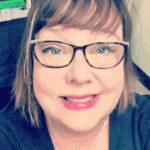 About the Author: Rhonda Richardson, Editor

Rhonda grew up with parents who gardened, hunted, fished, canned, and preserved food. Her mother was a professional cook and Rhonda credits her teaching everything from how to make homemade biscuits and gravy to what kind of meals to serve for different occasions. In the kitchen, Rhonda uses a mix of old-fashioned country cooking and up-to-date fads in the kitchen, often experimenting with replacing higher-calorie or fat ingredients with healthier options that still retain the delicious flavors of the originals.