No matter how careful you are with your Japanese knives, they dull over time.

The upshot of the smaller angle is that the edge is noticeably sharper than that of a western knife, making it ideal for slicing. The tradeoff is that Japanese style knives need to be sharpened more frequently than the western variety.

See my review on a great 15º sharpener.

The easiest way to keep Japanese knives in good condition is to use the best Japanese Knife Sharpener you can get your hands on.

If you have a Japanese style knife set and are in the market for a sharpener, it is critical to understand the distinction between the different angles.

Here, we’ll look at the important features to look for in an electric knife sharpener that will keep your Japanese blades in peak condition.

There are hundreds of different electric knife sharpeners on the market today. Choosing which one is the best for your Japanese knives can seem overwhelming, but it doesn’t have to be.

Let’s take a quick look at the essential features of a high quality electric knife sharpener.

The original knife sharpeners were flat stones that acted as an abrasive scraping away small amounts of metal to restore the sharpness of the knife’s cutting edge.

These sharpening stones were made of different material so that the surfaces of each stone had a different level roughness which is known as grit.

The person sharpening the blade would scrape the knife across the sharpening stones, starting with a coarse grit stone and progressing to a fine grit stone.

The finest grit stage, known as stropping, was typically accomplished using a leather strip, called a strop, rubbed with a light abrasive such as chromium oxide or a fine diamond paste.

It was the job of the person sharpening the knife to ensure that the knife was held at the proper angle and that all the stones and the strop were well maintained.

Electric Sharpeners to the Rescue – They are FAST!

The electric models will sharpen in about 90 seconds if you start with a dull blade. If you have a blade that just needs to be touched up before you slice up a sushi roll, it will only take 10-15 seconds.

Not only is a quick and effect way to sharpen the main cutting edge of your knife, it also creates a beveled edge since the angle changes with each stage. 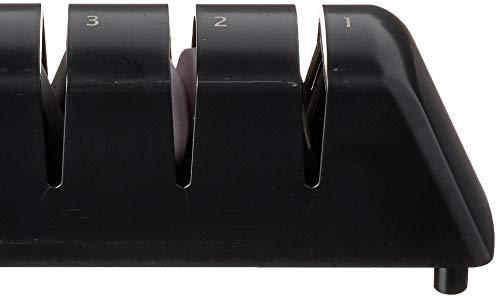 In a hurry? Check out THE REAL DEAL for knife sharpeners: Kai AP5301US Knife Sharpener at Amazon.

The easiest way to keep Japanese knives in good condition is to use the best Japanese Knife Sharpener you can get your hands on.

No matter how careful you are with your Japanese knives, they dull over time.

As the dull they lose their effectiveness and become increasingly dangerous to use.

Electric sharpeners are fast and many of them are now optimized for Japanese blades. Not only are they convenient, but they give you stability while creating a single bevel edge and a 15º angle for best performance.

There are a lot of great electric sharpeners out there, we look at some of the best: 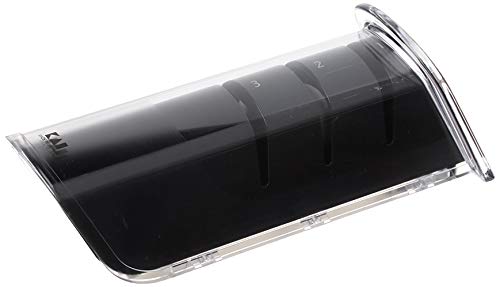 One of the best! This sharpener is perfect for your Kai or Shun knives. It’s super easy to use because well, It is specifically set at a 16º angle, making it hassle-free on your end!

Keep that in mind if you have your heart set on a 15º angle (which is traditional), this knife does not have that. But, you’d be hard-pressed to tell a difference.

This knife can sharpen carbon steel, clad steel, stainless steel. Just try it out and you’ll be amazed.

The Kai AP5302 also has a 1-year limited manufacturers warranty, leaving you worry-free and ready to sharpen your Japanese knives in your collection.

This sharpener sells for a great bargain at most stores, and occasionally I see it on sale. It will work on many different knives including, American, European and Asian.

And it has three stages of sharpening.

It weighs about 5 pounds so it won’t slide around when you are using it. See the full review.

Customers say this works well on all kinds of knives and returns them to like-new quality. Some say it removes too much material, however, so be cautious when using this product.

This sharpener sells for under $200 at most stores, and occasionally I see it on sale for different colors.

A nice feature on this product is it gives you the option to select what angle you would like to sharpen your knives at, either 15 degrees or 20 degrees.

Usually, 15º is for Japanese knives, while 20 degrees is used for American or European knives. It weighs about 5 pounds. I did a FULL review of this sharpener.

It works well with all knife types, even older knives that are extremely dull. Although some people say it does not work as well as other models, so be sure and do your research if considering this model.

This sharpener sells for about $140 at most stores. This model has a Trizor Plus edge which gives your knives the sharpest blade around.

It also uses a diamond abrasive that will never distemper.

As you can tell from this list Chef’s Choice is a company that makes several high-quality electric sharpeners, one should meet just about every chef’s need.

It weighs about 4.7 pounds and also features three stages for different knives or levels of sharpening. The full review.

Customers say this sharpener performs flawlessly and removes as little metal as possible during the sharpening process.

If you want to save a few dollars by getting a package, have a look at the honing steel & whetstone set. It’s a very good value. 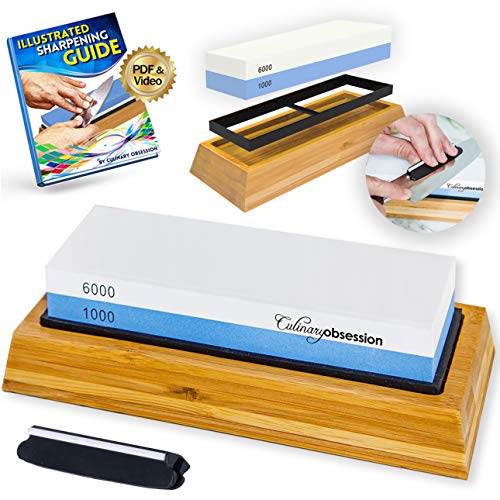 There are three types of whetstone:

Arato is the roughest of the three and is used mostly used to remove chips and restore an angle to a blade.

Nakato is the middle roughness and is used to get the blade sharp and finish the angle.

Siageto is the finest of the three and is used to finish the sharpening process. This is the step that keeps the knife sharp over many uses. 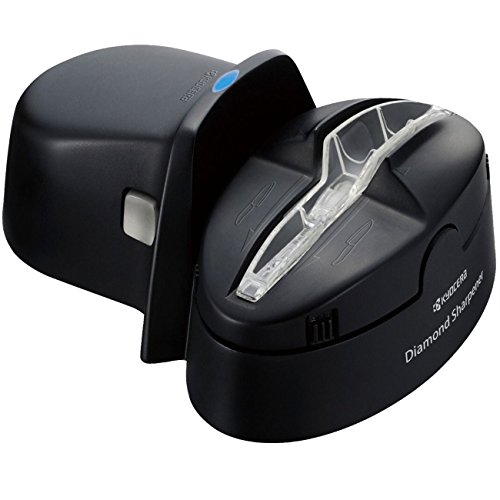 This sharpener costs a little less than $40 in retail settings. It has a diamond grinding stone, and as anyone familiar with stone sharpeners knows, diamond stones are great for even the dullest of blades. Some people really love Kyocera and that’s why it’s on the list. But for me, this is one that I wouldn’t recommend! Sorry…the main reason why is this:

It is battery operated, so be warned, it may eat through the batteries like candy.

It also includes a feature to control sharpening and ensure the correct amount of pressure is always applied to the knife. This is the lightest of all the electric sharpeners on this list at only two pounds.

Made by Kyocerca, a company known for high-quality products and materials, this sharpener is no exception.

Customers say this model can be used on both metal and ceramic knives. And like that this product can put an almost factory sharp edge back on a knife. However, they warn not all knives, not even all Kyocerca knives, will work with this sharpener, so be careful to make sure it will work with your knives before buying.

Take your time when shopping for an electric knife sharpener for your Japanese style knives. Make sure the model you select uses high quality abrasives and two to three sharpening stages.

Make sure the sharpener is capable of creating the appropriate 15º edge for your Japanese cutlery.

If you plan to use it for a variety of knives, consider a model that lets you switch between a 20º angle for western knives and a 15º angle for Japanese blades. A good knife electric knife sharpener is effective, easy-to-use, and enjoyable.

The most important thing to consider when choosing a sharpener for Japanese knives is to do your research. There are a lot of different options out there, so make sure the machine you purchase meets your needs. With a little research, you’ll soon find the sharpener for you.