As most serious chefs and knife enthusiasts are aware, there is a big distinction between the edges of Western knives as opposed to Japanese knives. Western-style knives are sharpened to a 20 degree angle, whereas Japanese knives are sharpened to a steeper 15 degree angle. Expand your knowledge on the importance and variety of knife sharpening angles. The reason many chefs appreciate Japanese style blades is because this angle creates a noticeably sharper edge. This means speed, accuracy, and less effort to cut through fibrous foods.

One consideration to keep in mind, however, is that because of this steep angle, Japanese knives will become dull a bit sooner than their western counterparts and need to be sharpened more often. This isn’t much of a problem if you have a quality electric knife sharpener. Today, let’s take a look at my personal pick for the best 15-degree electric knife sharpener.

Chef’s Choice is one of the most reputable names in the business of electric knife sharpeners. They’ve been in the knife sharpening game since 1985 and consistently put out quality sharpeners.

When it comes to 15 degree angle knife sharpeners, my favorite is the Chef’s Choice 15 Trizor XV electric knife sharpener. I like this unit because of its versatility, its ease of use, and its speed. 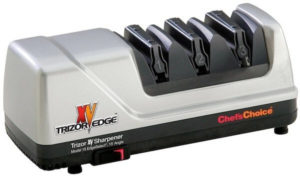 This electric knife sharpener offers the flexibility to choose between the 15-degree Japanese angle and the 20-degree western angle. Since most chefs have at least one or two wester angle knives, this lets you avoid buying a separate knife sharpener and meets all your sharpening needs in one unit. It is capable of sharpening almost any kitchen knife, including those with serrated edges, such as steak knives and bread knives.

The 15 Trizor XV is a solidly constructed sharpener. It weighs 4.6 pounds, making it sturdy but not unwieldy. It’s also fairly compact, at only a foot long, so it doesn’t take up too much space on your countertop. It is available in a brushed metal or platinum finish.

Due to the high-quality abrasives it uses, this sharpener removes a minimal amount of metal from your knives. This means that it actually extends the lifespan of your knives as opposed to other electric knife sharpeners.

The metal dust is then trapped in a magnetized dust collector, which is easy to access and clean. The abrasives actually create micro-grooves in the edge which act as tiny serrations and add bite and grip to the cutting edge of the blade. This is especially helpful in cutting fibrous vegetables or even meat.

The first stage, known as pre-sharpening, is used to restore a precision edge to extremely dull blades. In this stage, coarse diamond-coated discs prepare the blade for sharpening. If you are sharpening a knife that is already in good condition, you should skip this step as it removes the most metal.

The second stage is less coarse than the first stage and is used for regular sharpening. In stage two, diamond coated discs not only sharpen the edge of the knife but also begin setting a beveled angle which will increase the durability of the resulting edge.

Stage three is the final stage, known as stropping. This stage uses flexible abrasive stropping discs, removes very little metal from the knife, and creates a surgically sharp edge. This is the stage to use for knives with serrated edges as well.

(Once you get your sharpener situation under control, you need to get a cutting board, too.)

The Chef’s Choice Trizor 15 XV electric knife sharpener is my top pick among 15-degree angle knife sharpeners. I love the versatility of this unit. I can use it for every knife in my kitchen, with the one exception of my large meat cleaver, which doesn’t fit in the guided slot. It sharpens very quickly. I can get a sharp edge on a dull blade in approximately one minute. For routine sharpening, this unit gets the job done in about 10 seconds.

As far as price, this unit is on the upper end of the spectrum. However, unlike some of the cheaper knife sharpeners available on the market today, this unit can last a lifetime. It is also true that by using high-quality diamond abrasive discs, the Trizor removes less metal and extends the life of your knives. If you own expensive kitchen knives, it is important that your sharpener is of the same quality. I also like the fact the Chef’s Choice stands behind this product with a three year warranty.

After your knives have been sharpened don’t forget to store them in a safe and secure location which limits and nicks or dulling of the blade. The M.O.C Magnetic Board Knife Strip is not only a secure way to store your knives it is beautiful addition to your kitchen.