When you’re collecting cast iron cookware, it’s easy feel overloaded by the vast amount of information available out there. After all, if you’re looking for a cast iron piece that will appreciate in value over the years, you’ll want to consider not only getting a piece that’s in good condition, but also one made by a reputable manufacturer.

Cast iron cookware has been around for more than two thousand years. The material was prized for its durability, heat retention, and natural non-stick surface. By the mid-1800s, cast iron was the material of choice for cookware in America. One of the most popular manufacturers in this heyday of cast iron pots and pans, which last until the 1950s, was Griswold Manufacturing Company. The company operated for more than a century and was globally recognized as one of the leading manufacturers of high quality cast iron pots and pans. Today, Griswold cookware is a collector’s item. Let’s take a quick look at the history of this company.

The company was founded in 1865 under the name Seldon-Griswold Manufacturing Company. Matthew Griswold and his cousins Samuel and J.C. Seldon started the company in Erie, Pennsylvania near the Erie Canal. At this time, the company made light hardware, such as butt hinges, stove dampers, and other stove accessories. The most collectable items made at this time were waffle irons, mailbox flaps, and spittoons bearing the company logo: “Seldon-Griswold.” 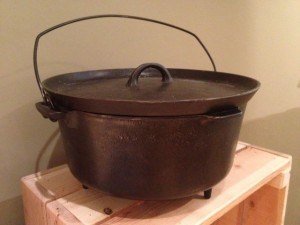 In the 1870s, the company expanded its product line to include cast iron cookware. Pieces from this early are some of the finest and most collectable. These can be identified by the company logo: “ERIE” stamped onto the underside of these pans. These pans are thinner and lighter than later pieces made by the company.

In 1884, Matthew Griswold bought out the Seldon brothers interests in the company, though the name was not officially changed to Griswold Manufacturing Company until 1887.

Matthew Griswold passed on ownership of the company was passed on to his son, Matthew Griswold Junior, in 1905. Matthew Junior presided over the company until 1914 when he turned over ownership to his brother Marvin. Under Marvin Griswold’s leadership, the company saw a period of rapid growth. The company began selling their products worldwide and gained a reputation for production quality cast iron cookware.

By the 1940s, the Griswold Manufacturing Company had hit hard times. The quality of the cast iron they produced had diminished greatly. At the same time, the company faced new competition from manufacturers making cookware out of more modern materials such as aluminum. The Griswold family kept control of the Erie plant until 1946, when they sold it to an investment group which in turn sold it to the Wagner Manufacturing company. In 1957, the original Erie plant was finally closed.

Today, Griswold cast iron cookware pieces are highly collectible, due to both the quality of the pieces and the unique insignia they bear. As we mentioned above, some of the earliest cast iron cookware Griswold produced have the word “ERIE” stamped into the underside of the pan. These pieces date between 1865 and 1909 and are highly sought after collectors’ items.

From 1874 to 1905, a few different models of pans went into production with a spider and web log on the bottom of the pan. The word “ERIE” was imprinted above the spider and written in raised lettering on top of the spider. Since the pan came into contact with the hot stovetop and was moved frequently, the word “ERIE” imprinted on the spider is often damaged or worn off completely. If you’re able to locate one where the spider and web symbol is in good condition, these pans are extremely collectible. Those with slightly damaged symbols are still collectible, since the number of these pans made was very limited.

From 1884 to 1909, some skillets came with a diamond shaped logo with the word “ERIE” written inside the diamond. These are less collectible than the spider and web logo but are still excellent pieces of cast iron cookware.

The symbol most collectors associate with Griswold Manufacturing Company, however, is the cross symbol. This symbol has a plus sign shape within a circle with the word “GRISWOLD” written inside. The company used several variations of this logo over the years and the variations between these different logos make a big difference in the collectability of the pieces. The large sized emblems are much more collectible, for example, than the medium and small ones. If your goal is to have a useable piece of cast iron cookware, those with the small and medium sized cross logo can be a great deal.

The oldest cross symbol pieces have the world “GRISWOLD” in italics with the word “ERIE” below in block style letters. After that, the company had the words “ERIE, Pa., USA.” written beneath the emblem. And finally, from the 1920s to the 1940s, the company revised the logo again so that the word “GRISWOLD” appeared in block-style letters.

After Wagner Cast Iron Manufacturing Company bought Griswold in the late 1950s, they produced cast iron pans with both the Griswold and Wagner company names. Be wary of these pieces as they are virtually worthless to collectors. They were not made in Erie, Pennsylvania nor were they actually made by Griswold.

Griswold cast iron cookware can make an excellent addition to your collection or kitchen. For nearly a century, this company produced top notch cast iron pots and pans and earned global recognition. Though the company was eventually dissolved, the pieces that live on are a testament to the quality and durability of Griswold cast iron. This cookware has a lighter weight and smoother finish than modern cast iron which makes it all the more desirable. Whether you’re looking to preserve a piece of history or use it in everyday cooking, Griswold cookware will forever be a part of American history.