Unless you’re English and enjoy your beer warm, having a few mugs in the freezer to really deliver that crisp, ice-cold hit on a hot day is a thing of beauty. A room temperature mug immediately warms up the beer you spent hours chilling, but a frozen mug can keep beer super cold for as long as it takes to drink it and open another one.

Why Frost a Mug?

There are some who will say frozen mugs will cause beer to develop ice crystals, and that serving beer very cold makes it difficult to taste some of the nuances of the brew. However, if you want a refreshing chilled lager or pilsner to quench your thirst on a hot day, freezing your mugs is the way to go.

There are a few basics when it comes frosting a mug: make sure it is very clean, rinse well if you use dish soap, and don’t dry it off after washing. Instead, stick the mug right in the freezer so it comes out with the classic frosted look.

Beer mugs have been around for as long as there has been beer to pour in them—and that is a long time indeed. Some of the earliest vessels were made of clay, although horn and wood were used as well. There is something about the idea of vikings gathering in a hall, singing songs about their latest heroic feats over several horns of mead, that captures the imagination!

The problem with drinking horns is that animal material needs to be kept dry in order to prevent rotting. You have to be pretty tough to enjoy your beer after your horn starts adding a little fungal flavor to your brew. Wood also served as a popular material for mugs, but it too goes bad over time, imparting an unpleasant flavor as bacteria grows within the inevitable cracks that appear after constant soaking and drying.

Pewter improved drinking vessel technology around five hundred years ago. We would even recognize the style that was popular in Europe at that time. The downside is that, in the past, the metal alloy contained lead. Besides lending a metallic flavor to the beer, pewter mugs put beer drinkers at risk for lead poisoning. Once glass became widely used, things didn’t change much until today’s thermoplastic polymers, which mimic glass but are much less likely to crack in your freezer.

Many of the most popular mugs designed specifically for freezing use thermoplastic polymers, a type of plastic that has the added advantage of being easily molded. This allows for the cheap production of mugs that are double-walled to create an insulating space between the contents and the outside world, keeping beer colder for longer. One of the more popular examples is the Frosty Iceberg Beer Mug, fashioned in the classic style, dimples and all. It’s fitted with a nice retro handle that lets you to poke away at meat or calzones on the grill without having to put your beer down.

Despite how they might look, the technology behind beer mugs is quite modern. Within the double walled polymer, shell is a freezable gel, which essentially acts as a long-lasting ice cube that never waters down your beer.

Going straight from the bottle? Keep it cold with a Yeti or Thermos koozie.

The Frosty Iceberg mug appears hefty, but it’s quite lightweight. It only holds 11.8oz, but that’s not a problem if you’re downing 12oz cans at a party. The price isn’t too bad either, calculating per piece. These are long-lasting mugs and won’t break like their glass cousins, so you may consider this a good investment if you regularly have a bunch of intoxicated (and perhaps clumsy) friends over to watch the game.

The Bell Freezer Mug and the Wyndam House Freezer Mug are very similar in function and appearance. The only big difference is that they hold 16 and 17 ounces, respectively. This may or may not be a great thing if you drink 12oz bottles or cans, as it isn’t as satisfying to have a mug only ¾ of the way filled. Opening another beer to top off might mean the second beer will be warm and flat by the time you get to it, thus defeating the purpose. 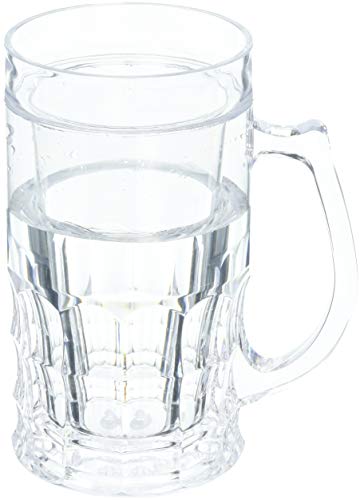 The size of Frosty Iceberg Freezer Mug is truly ideal for parties. So get online, grab the twelve-pack, and invite a few friends ‘round. (Tell them to bring beer, too!) When they arrive, they can each have their own mug to keep their beer ice cold.

For the bourbon hour, the right glass is important too. Check out this post where I go through the best rocks glasses for your favorite bourbon.

1 thought on “Best Beer Mugs for the Freezer”