Popularized largely by the craft beer renaissance, interest in IPAs has exploded in recent years. These brews are hoppy beers, known for their strong and bitter flavor. They pair well with strongly-flavored foods, such as grilled meats, and come in three main styles: American, English, and Double.

Enjoy a frosty mug on a hot day! Learn which beer glasses are best for putting in the freezer.

For those of you low on time: My favorite IPA glass is the Spiegelau tulip glass set from Amazon.

The first known use of the term “India pale ale” is from 1829. Formulated to survive long voyages at sea, the extra hops impart the deep and rich flavor that characterize IPAs. This pale ale came about from the need to preserve brews intended for export to India, nearly 200 years ago. They soon became popular in their native England, and also in other colonial countries.

Modern IPAs are produced in the UK, the United States, Canada, and Belgium.

American IPAs are usually crafted using American hops and come in two main varieties. IPAs produced on the East Coast typically use more malt to balance out the hops. The hop flavor in ales produced in northern California and the Pacific Northwest, on the other hand, are more robust. There are also Double (Imperial) IPAs, which are even hoppier.

The short answer is, “yes.” The long answer is “yes, of course it does!” Like any other quality alcoholic beverage, sampling an IPA greatly benefits from being tasted from a good quality glass. Bourbon is sipped from snifters, Champagne from flutes, and red wines from large-bowled glasses. A well-crafted IPA, with all its complex and volatile aromas, deserves the same respect!

Read about appetizers that pair well with Champagne.

There are plenty of different style of glasses to sip from, each having their own characteristics. Take a look at the various options.

At about 8 inches in height, this glass holds just under 20 ounces. As the Brits created the IPA, it is not unfair to think that it should be drunk by the pint (or close enough)!

The beer mug is the “All-American” mug, the mug made famous by Norm and Cliff Claven from the hit television show “Cheers” in the 1980’s.

It’s a little-known fact that Norm wasn’t actually drinking beer. The suds were made by adding a pinch of salt to the “near beer” cocktail he is seen drinking.

The most notable characteristic of a beer mug is its thick glass (or plastic) handle meant to keep your hands away from your precious brew. Keeping you from transferring unwanted heat to your glass.

You’ll often see dimples in beer mugs, some believe this is to accentuate the shade of the lager, while others believe it is just a cosmetic thing. Either way, beer mugs are great for enjoying large quantities of beverages at a time.

Bring your favorite IPAs to your next tailgating party. Check out my guide on how to correctly pack your cooler with dry ice.

Shaker pint glasses have come under fire for years by beer aficionados, but just because they’re nearly everywhere doesn’t mean they aren’t a good choice for an IPA. If they disappeared, I’m pretty sure the same folks that complained about them would be the first to demand their return.

A good IPA glass will enhance the flavor of your brew by aerating the drink you time you lift the glass and sip. There is a tapered bowl in the glass that directs the hoppy aromatics of the beverage straight to your nose. A lot of these glasses will also have wave-like edges toward the bottom to allow carbonation to escape when drinking.

Short for the German word Steinzeugkrug, meaning “stoneware”. These beverage holders probably won’t have many places in your daily life, but they round out your beer glass collection.

They are strikingly similar to the typical beer mugs but have a hinged lid with a lever that you open every you take a sip.

Typically used as ornamental pieces, beer steins are great to have in your arsenal. Even though it will probably rarely be used.

A nice tulip or goblet can help get the most out of an India pale ale. A tulip is nice to hold and gives you that “in the bar” feel, even when you’re at home. There are few better than the ones produced by Arcoroc. They come in packs of up to 24, so they are great value for money and you won’t be too upset if one of your friends breaks one.

Resembling short stubby wine glasses, goblets are constructed with thick glass walls and a short stem to elevate the drink a bit. This is really just a cosmetic thing, but I guess it does allow the aroma to hit your nose.

These are very tall, very thin classes mostly used for light beers so it’s not really used for IPA’s. Although, your favorite IPA definitely looks more than presentable in this style of glass.

The downside to these beautiful looking glasses is that they don’t hold as much beer as other glasses.

Fortunately, there are many glasses that are perfect for an IPA but won’t break the bank. Let’s look at some of the best.

When it comes to goblets, Teku makes a refined-looking 14.2 ounce IPA glass that still lets you enjoy more than just a small bottle’s worth in one hand. After all, a hearty beer should be enjoyed from a nice, big glass.

The wine look of it makes it work for the more formal occasions. One, where you may not want to be grasping a giant beer mug. The quality of these glasses are very high and you’ll get years of use from this set. 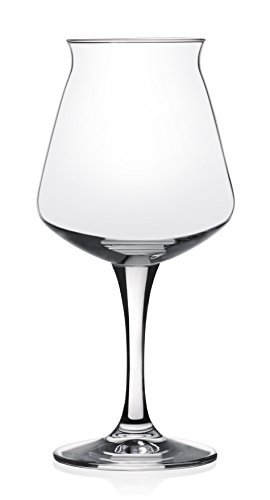 See the Teku 3.0 Craft Beer Tasting Glasses by Rastal (Set of 6) at Amazon

When it comes to beer enthusiasts, the “uniqueness” of our glassware is of the utmost importance. And when it comes to uniqueness this double wall tumbler is at the top of the list.

The outer wall of the glass is shaped no different than a typical tumbler. But the inner wall, on the other hand, that’s where the term “unique” becomes a factor.

The inner wall is shaped similar to a thinner-stemmed beer glass, except the liquid fills the stem as well. This makes for a very interesting, and eye-catching, aesthetic that you’re bound to enjoy.

Of course, the quality of the glass is just as important as the looks of it, and I’m happy to report that the Dragon double wall does more than hold its own. These glasses are highly durable, and probably ones that you will use for years to come. 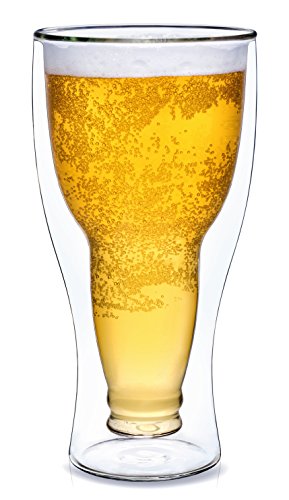 Check out the Dragon double-walled tumbler at Amazon.

Spiegelau makes a beer glass that is perfect for a craft beer, such as Rogue or the very tasty Dogfish Head. The manufacturer is owned by Riedel, and they know a thing or two about glassware.

It has an interesting design, to say the least, but it pretty much falls in line with the other designs that Spiegelau has pushed out before. And apparently, there is some science behind it. Let me break it down.

Coming in a set of six glasses this Spiegelau set great for gatherings. 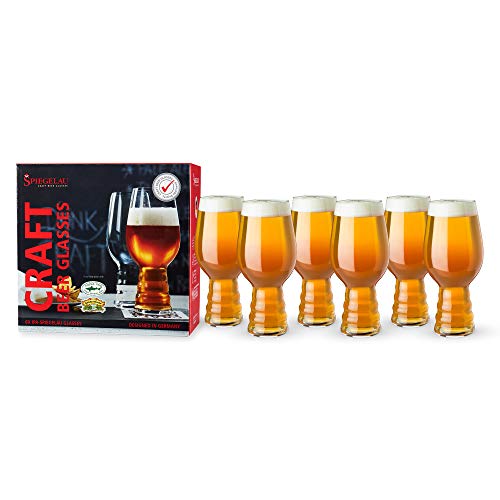 Isn’t it true that customized glasses are among the favorite gifts a beer connoisseur can receive? For me, that is most definitely the case.

If you’ve got someone in your life who is very hard to shop for but you know loves beer. Get him this glass and have it engraved with his name.

It stands about 5-inches tall with a silhouette that makes your beverage easy to hold and maintains an elegant look while doing it. And oh by the way, holds an impressive 16-ounces of your most cherished IPA. 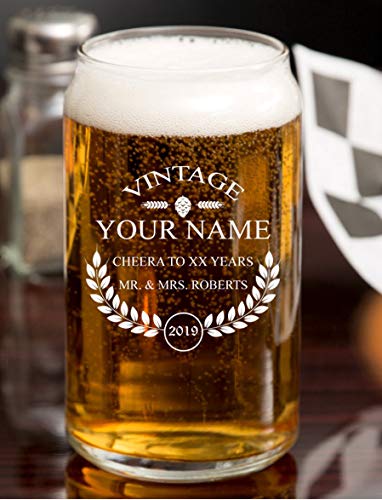 Many hardened beer drinkers will remain loyal to the traditional beer mug, and the Hofbrauhaus Beer Mug is one of the best. It’s as big and strong as you can buy (a half liter), and as heavy as an IPA (2 pounds).

These mugs are a great addition to any glassware set. A quality mug like this feels good to drink from and makes a great gift if you have a few friends who enjoy a good beer. 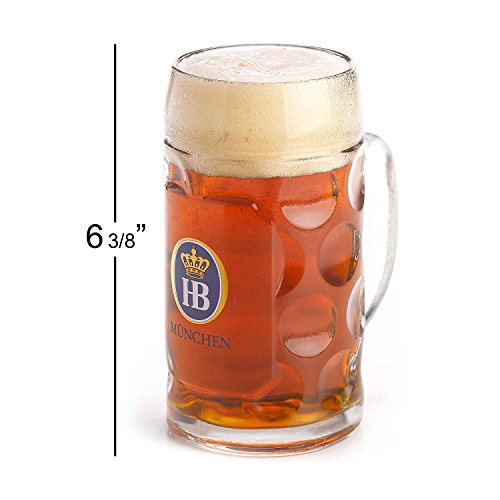 At 6 inches tall and with a capacity of a full pint, this sturdy glass can stand up to even the most robust Imperial IPA.

Sierra Nevada is a brewing company well established in the brewing community – oddly enough, it’s not based out of Nevada at all. This glass is embroidered with the famous Sierra Nevada emblem across the front of the glass.

It’s sturdy, has a great size and pairs well with any beer you choose to enjoy on your Saturday afternoons. 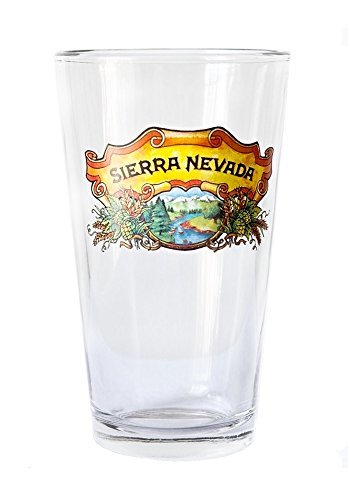 Tulip glasses are great for your stronger brewed beers – such as an IPA. They accentuate the aromas of the beer. The Libby 16-ounce is more of a tumbler than your average tulip glass because it lacks a stem. It does make it easier to use in my estimation. 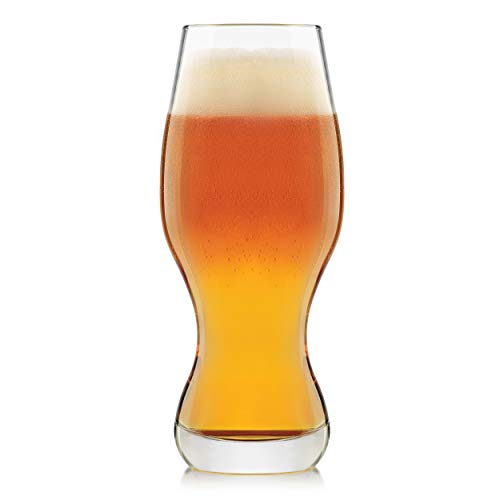 See the Libby Tulip Tumbler Glass (Set of 24) at Amazon

Spiegelau also makes a tulip, and the 6-pack is competitively priced. You’ll marvel that you ever cleaned the mouth of a beer bottle with your shirt after enjoying an IPA from one of these classy glasses.

This glass is designed to enhance the texture, aroma, and flavors of your favorite Pale Ale. It’s got a phenomenal contour that works flawlessly in a formal setting – rather than brutishly lugging around a cumbersome beer mug at a dinner party. 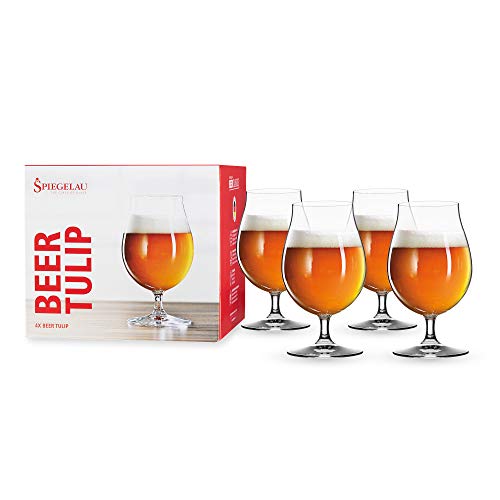 If you like a good bourbon, I think you’ll enjoy these rocks glasses.

If you’re a fan of IPAs, get yourself a pack of one of these glasses! Quality glassware really lets you enjoy the full-bodied, complex flavors and aromas that these hoppy brews offer.

Pair that IPA with delicious BBQ. Check out my recipes section for tutorials on how to smoke succulent prime rib, brine salmon for smoking, and more!

For more recommendations on products for the adult beverage connoisseurs out there, make sure you’re keeping your beer at the right cool temp with the best cooler for beer bottles. Then check out this post on the best corks for wine bottles. Never struggle to pop a cork again with the best corkscrew for old corks.

You might also like this article on the best ice machine for your home bar or this one on the best Thermos flask .

Fancy something tropical? See my reviews of the best margarita machines and some great margarita mixes to use with them!