Baking is wonderful, and the results can be heavenly to your taste buds. But most recipes call for sifting flour. What’s up with that?

Well, the honest truth is that many people skip this step, and to be even more honest, even professional bakers sometimes skip it as well.

But using a sifter for your cake flour, or almond flour, or even when preparing sifted confectioner’s sugar is one of those secret tricks to taking your baking to the next level.

And best of all, you don’t need an expensive stainless steel hand crank strainer to do the job. There are plenty of do-it-yourself sifter solutions that work perfectly fine.

What does sifting flour do?

Sifting, first of all, ensures there are no lumps in your dry ingredients or your batter.

Sitting in their boxes, dry ingredients tend to clump together. It can happen when the dry powder is just brown sugar, confectiontioner’s sugar, or cocoa.

Running the powder through a sieve gets out all those nasty clumps.

In addition, and perhaps even more importantly, sifting the ingredients will aerate the flour.

When you bake, you want your end product to turn out light and fluffy. And adding plenty of air does that.

Though buying a commercial duster is the easy choice for baking, most people don’t bake enough to make the purchase worth it, and as a consequence, DIY sifter options are not only common, but encouraged.

These two dry sifting methods are among the most popular.

The most common method is to use a mesh filter. Chances are, you already have a mesh filter in your kitchen as they are incredibly useful for draining pasta, removing bones from soup, and dozens of other tasks.

Just plop a bowl down in front of you, drop your dry ingredients into the mesh, and with one hand, lightly tap against the mesh. It’s so easy, and the best part is, a mesh filter is incredibly easy to clean.  Just run clean water through it and let air dry, or pop it into the dishwasher.

Equally easy, and also fantastic for aeration, is to put your dry ingredients straight into the bowl, and then whisk them using a French wire whisk (Amazon). 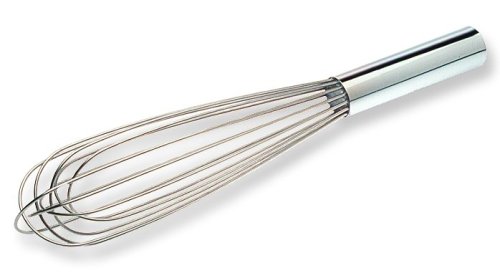 The great thing about using a whisk is that it will break up all clumps instantly, and since the ingredients are dry, they will not stick to the tines. Best of all, after using a whisk, your cleanup will entail only a quick rinse through the sink.

If you have neither a dry mesh nor a whisk, Martha Stewart cheerfully suggests that whisking using a fork will do in a pinch.

Brian Von Prong, alias Manfred, famous cook, says the secret to great sifting is to always be incredibly gentle to be sure that the ingredients are not packed in. In fact, in a short five-minute video, Manfred cautions no less than seven times against packing the ingredients.

In another clever but production-wise not so good video on YouTube, an enterprising young man created his own flower sifter by punching out the bottom of a grocery tub and taping a piece of window screen to the bottom of the tub.

Just be sure if you try this method to use a plastic tub, and not last night’s Kentucky Fried Chicken bucket.

Why do people not sift?

The plain fact is that many people don’t bother to sift and their baked goods turn out all right. And it may take and extra five minutes or so (ten if you double-sift) and people are often in a hurry.

Just mix it up, add the wet ingredients, and pop it in the oven.

However, many recipes, in particular cake recipes for light, delicate ones like angel food or sponge cake, demand sifting.

And that’s one reason their end results turn out as good as top-grade store-bought and high-end grocery store’s bakery goods.

It’s unfortunate, but when baking at home, many people never really give the recipe a second glance. The recipe may say “sifted flour”, while you just blithely pour the ingredients from the box to the bowl.

All the best chefs use sifted ingredients or have an assistant that does the sifting for them, but if you want to make rock hard sponge cake that people use for paperweights or doorstops instead of eating, ignore all the above advice.

Sifting is particularly important if the ingredients have been sitting in the bag or box for several months since you last baked.

Interestingly, not everyone who is a professional chef agrees on the need for sifting.

Michelle Lopez, a popular and critically acclaimed blogger behind Hummingbird High, writes in Bon Appetit that sifting is just a waste of time in most situations.

Michelle argues that modern milling techniques produce a much finer powder in the bag than mills produced in generations past.

She argues that most commercial mills produce clump-free ingredients that rarely require sifting.

Yes, she says, if the bag has been sitting in the cupboard for several months, it may need sifting.

Michelle argues that the fastest way to produce instant sifting is to store the powder in a large, airtight container, and then give the powder a few gentle swirls with a fork.

Finally, she argues that if you are making a dessert that needs to be gently folded, then by all means do your sifting first. However, if you are using an electric mixer, the mixer will pretty much eliminate all clumps, so there’s really no need to sift.

By far, however, Michelle Lopez is in the minority. Thousands of professional chefs as well as amateur bakers all say the same thing, “sifted-flour” produces the best results.

In general, the action of the aeration alone results in a much fluffier product.

But, really, your baked goods don’t care whether you use a DIY sifting method or if you use a costly kitchen sifter.

Feel free to put booties on your pet hamster and let him do the sifting if you want.

Check out my other article on The Best Flour Sifters

Why is it important to sift flour?

It’s important to sift flour for a couple of reasons.  One, if you don’t bake often and your dry ingredients aren’t used often, they can form clumps in their storage containers.  Sifting these ingredients, like flour, ensure that your final products won’t have lumps in them. Also, sifting aerates the flour, resulting in airier, fluffier cakes and other delicious baked goods.

Is it possible to actually over-sift the flour for certain recipes?

Actually, some people claim that you can over-sift flour and that sifting more than three times or so will make the finished product “too dry”.  In fact, this is completely untrue.  The more you sift your flour, the lighter and airier it becomes while it totally gets rid of any lumps, which you definitely do NOT want.  But there is no chemical reaction to flour when you sift it.  It’s impossible to “dry out” the flour by sifting it, so sift it until it feels right for you.  (Most people recommend sifting two or three times for baked goods such as cakes.)

Should I sift my flour before or after I measure it?

What happens if I don’t sift the flour if the recipe calls for it to be sifted?

Sifting breaks up lumps in the flour and aerates it simultaneously.  It’s easier to mix sifted flour with your other ingredients than if it’s unsifted.  It ensures that the ingredients are mixed more evenly; it also guarantees that you’ll be measuring the flour more consistently.  The worst things that will happen if your recipe calls for sifted flour and you neglect to sift it are that you may have floury lumps in your dough or batter and/or you’ll have too much flour in your finished product, causing a slight difference in taste and consistency.

A Handy Video on YouTube:  How to Properly Measure Flour

Country Living: What Kind of Flour Should You Use for Different Types of Baking?

Want to know the real secret to sifting? Check out this rather delightful, tongue in cheek video by Brian Von Prong, alias Manfred found on YouTube.