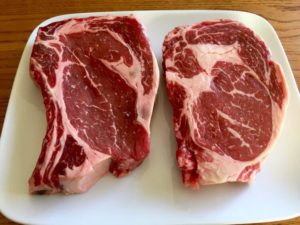 I was in the mood for steak and I found two great looking ribeye steaks. One was USDA Prime and the other was USDA Choice.

And I got excited for a grilling experiment.

What’s the Difference in Prime and Choice Grade Meats?

In short, the fat level and tenderness. Choice meat doesn’t have as much fat as Prime meat. Here are the steaks that I got for the experiment, first the Choice (Angus Beef grade in this case), and then the Prime.

The USDA Choice, Prime, and Select

Basically, Prime is the best and it’s the most expensive. The Prime has more fat marbling, which is the number of thin layers of fat in the lean meat. Fat tastes good and makes the cut juicier. Prime is normally in restaurants since it’s pricier.

Choice is what I get most of the time. It’s the middle ground: better than the store “sale” cuts. Those specials are normally select grade meat and I’ll mention that later. You can find Choice that is on the fattier side and that’ll lend itself to more flavor and tenderness.

Here is exactly what the USDA says:

Alright, have a look at the Choice and the Prime side-by-side:

The Cook – A Reverse Sear

I smoked the steaks for about an hour at a low temperature, about 150ºF. If I don’t have time to fire up my electric smoker (a Smokin It from Amazon), then I’ll put the steaks in the toaster oven for about 1-2 hours at 175ºF.

It sounds crazy at first, but it allows the fat in the steak to start rendering and the enzymes in the meat start tenderizing the meat. I let the internal temperature of the meat get to about 120ºF.

At 120ºF, I’ll pull the meat and let it rest and cool while I lit the coals on the grill. I filled up my Weber chimney (Amazon), put some newspaper with some cooking spray on it, and lit the coals.

I also used several chunks of hardwood, Apple Wood Chunks from Amazon, in this case. Hardwood burns hotter than standard Kingsford briquets and I was all out of lump charcoal, which gets wicked hot. 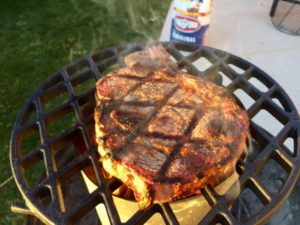 I placed my cast iron searing grate (check it out at Amazon) on the top of the charcoal chimney. You’ll get perfect cross-hatched searing marks on your steaks… It’s like cheating! I got this technique from Alton Brown of Good Eats. When you really want to sear meat, you need to get a super hot source of heat so concentrating the heat is an obvious solution. 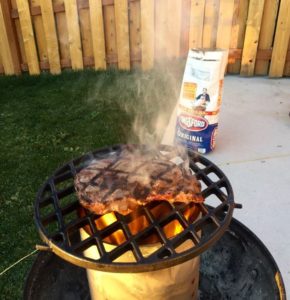 Be careful doing this balancing act with fire! Make sure everything is level and well balanced. The grate is heavy and it’s resting on the top of the molten hot of the chimney. So exercise great caution.

Don’t have time to light the grill? Use a grill pan.

I was so excited that I forgot to take pictures of the finished result. It happens often but I figured I’d post this anyway. The verdict is that the Prime was indeed better on this day. It’s clear from the before images that the Prime was fattier by a long shot and the marbling was intense. It was really juicy!

The Choice ribeye was good, better than many restaurants if I may say so. But it wasn’t as good as the Prime.

What about USDA Select?

Select is leaner and less flavorful as a result. If you wonder why your steaks aren’t as good as the ones at the steakhouse, it’s probably because you are starting with a leaner cut of meat. Go get yourself a Choice cut and you’ll see and taste the difference.

I don’t get Select grade Strip or Ribeye steaks anymore since it almost always turns out bad, meaning dry and not as flavorful. I tried Select filet and it was surprisingly good! The reason? Filet is so lean anyway that if you get filet which is very low in fat, then you’re not missing the fat at all since it isn’t supposed to be there.

If I’m getting a chuck roast for stew or chopped beef BBQ, then I will get select. Chuck is a fattier cut of the cow and it’s going to be cooked for a long time: braised or smoked. The leaner Select grade meat will be fine for long cook times.

More about US Beef Grading

I do the hard research. Here are the best toaster ovens. Then check out this article where I go over the best electric knife for cutting bread.

Image from the USDA, Creative Commons.