There’s nothing like a good charcuterie board or meat and cheese tray. Salami and summer sausage are delicious on their own or with your favorite beer or wine. But now that we think of it: what is the difference between salami versus summer sausage?

The main difference between these two favorite cured meats is in their moisture content. Summer sausage is usually a semi-dry sausage that loses about 15% moisture during the aging process.

What is Summer Sausage and How Is It Made?

Summer sausage is a fermented sausage typically made of pork and beef, although one that is made from beef alone is also common.

Compared to other cured meats, summer sausages are easier to chew and easier to slice. This is why many people prefer to include them in their cheese and sausage platters.

Summer sausage can either be dried or smoked. Seasonings that are often used include mustard seeds, black pepper, garlic salt, and sugar. Since summer sausage is also fermented, it has a distinctive tangy taste.

Before there were refrigerators, people found various ways to preserve their food. It is said that sausage, in particular, was cured during the winter and was intended to be saved and then eaten during the summer by field workers.

Nowadays, a summer sausage means any sausage that does not require refrigeration until it is opened. This is also a great reason for it being such a common gift around the holidays.

Once opened, summer sausage can be refrigerated for up to a month before you need to discard it for good. 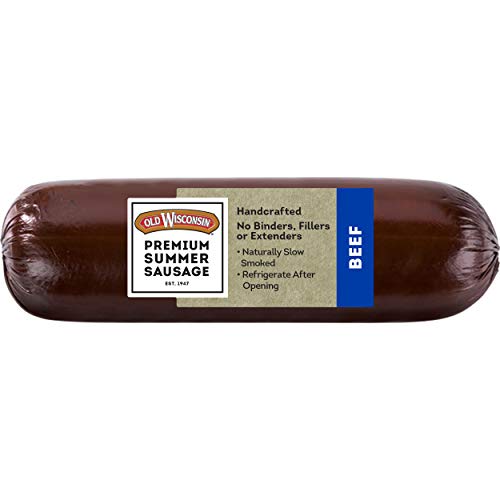 This beef summer sausage does not need to be refrigerated until after opening, which means that you can enjoy it whenever and wherever you want. It is perfect as a snack, to include in a charcuterie board, and as an ingredient of your favorite meal.

Having been slowly smoked over a hardwood fire, it has a rich color and a flavorful taste. It also has the perfect blend of spices. This premium sausage is gluten-free and has zero MSG.

What is Salami and How Is It Made?

Salami is a generic term for any type of encased meat product. Derived from the Latin word “Salumen”, it is a mix of salted meats. Salami is typically beef or pork meat that has been fermented and air-dried.

Salami was popular among the peasants in Europe because it could be stored at room temperature for up to 40 days. They were able to stretch out their meager and often inconsistent supply of fresh meat during those times.

There are numerous types of salami, so it is hard to describe a general way of making it. Each type is differentiated by the fineness of the ground meat and its different mix of spices. Favorite flavorings and spices that are usually used include salt, pepper, garlic, wine, mace, fennel, and cinnamon. After the salami is enclosed in natural or synthetic casings, it is aged in dark, cool cellars.

This salami is made from the choicest cuts of pork, slow-cured with spices and robust wine. It is elegantly and tastefully wrapped with paper that makes it perfect for gift baskets. It is also good for sandwiches or with just a cracker.

Columbus Salame uses paper as a casing, which is a mark of a well-made salami. It is convenient to eat–all you need to do is peel, slice, and devour.

Similarities and Differences Between Summer Sausage and Salami

One other difference between the two is their shelf lives. A summer sausage only needs refrigeration after opening. It is good for up to three weeks inside the refrigerator. Salami can go on the kitchen counter for up to 6 weeks and if refrigerated, can be kept indefinitely.

The meat of both sausages needs to undergo curing to start the cooking process. Curing salts that contain sodium nitrate and nitrite are used as antibacterial aids. They also help in preserving the color of the meat. The ideal curing environment is about 55°F, with a relative humidity of about 70%, with little or no light.

After the curing period, the meat of either the summer sausage or salami is then ground and put into their casings of which there are two kinds: natural and collagen.

What Can You Do with Summer Sausage and Salami?

Summer sausage is perfect as a snack, on charcuterie boards, tossed in a casserole, and for picnicking. It is usually served thinly sliced and is perfect with wine and cheese. It is also great on sandwiches.

While some people fry it, the best thing about a summer sausage is that it’s ready to eat and can be eaten at room temperature.

Meanwhile, salami is often likened to bacon when it comes to versatility. It is a great sandwich filler, pizza topping, or can be added to salads. Salami can also be good as an ingredient in risotto, pasta sauces, and other dishes. 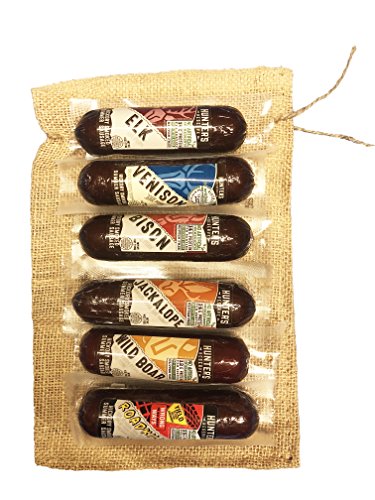 If you’re looking for something fun and unique for your next party, this is it! The sausages are fully smoked and are ready to eat out of the package. The set includes 6 different sausages in varieties that are randomly picked for you.

You will be getting 3 regular varieties like beef, pheasant, and venison sausages. If you’re lucky, you can get the exotic ones like elk, reindeer, wild boar, bison, jackalope (venison and rabbit), and roadkill (wild boar, elk, venison, antelope, rabbit, and beef). 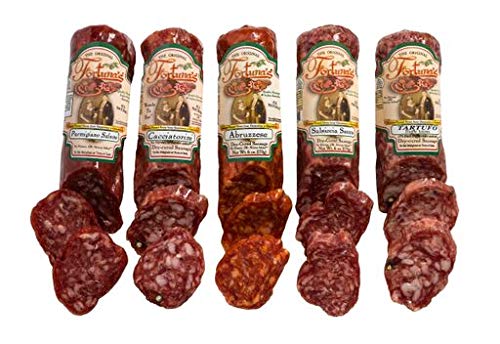 This is the perfect salami assortment that you can bring anywhere. It can be given as a gift or just to have the best salami inside your fridge.

The 5 kinds of salami are all-natural and nitrate-free. They are also naturally air-dried and not heat treated.

Summer sausage and salami are ready to serve and available year-round. They are perfect for snacking or on a charcuterie board. The sausages can spice up your sandwich and can be taken anywhere for an easy, high-protein snack.

They also make nice gifts for friends and family, near and far. After all, they keep their freshness pretty well. They can be fun gifts, too, as our sausage platter suggestions show.

What is the difference between sausage and salami?

Sausage is any food that is made from ground meat formed in a casing. Salami is a cured sausage that is fermented and air-dried. It is typically made from beef or pork.

Sausage is usually made from ground pork, beef, or veal along with salt, spices, and other flavorings. Some sausages are sold raw and can be cooked by pan-frying, broiling, or barbecuing. Some have been pre-cooked during processing when the casing may then be removed.

Summer sausage is a fermented sausage with a low pH level that can slow down the growth of bacteria. This results in summer sausages having a greater resistance to spoilage, especially during the hot summer days.

Traditionally, a summer sausage was cured during wintertime and consumed throughout the summer.

Are you supposed to cook summer sausage?

Summer sausage is dried or cured when you buy it so, in a sense, it has already been cooked. You don’t even need to refrigerate it. You may want to heat it but it doesn’t necessarily need to be cooked.