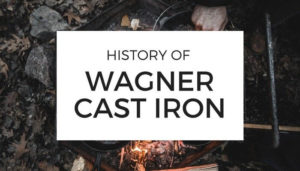 Do you have dull knives? Sure! We all do. All knives get dull eventually. Look at an electric sharpener for speedy sharpening.

Here are some comments from our old blog:

From my research, the pan you described is of a fairly recent origin. I believe that they were cast in the 90′s for the centennial celebration of Wagner

Hey Paul, You’re right. That’s centennial skillet isn’t very old…
After all, back in 1891, they didn’t put the dates on the pans.

I have a deep dish fryer. Says Wagner Ware in an arch. It has one W for both. It says National at top and at the bottom it say 1359C. I got this in the 1970′s at a flea market. Please tell me how old it is. Thank you

I found my second 10 inch skillet at a tag sale for $20 which I thought I might have paid too much for. It is a Wagner. On the bottom it says Wagner Ware Sydney -O- 1058 I. Can you give me any info on this? It also has a heat ring on the bottom.

Hey Kim –
That’s not a bad deal if it was in pretty good condition. How smooth is the inside and how does the seasoning look?
I have the 1058 too and probably paid about the same amount.
I think it’s from the 1922 – 1959 period… How do you like it?

My mother, who just passed away at 92, has a Wagner Ware deep skillet, double pour. The company name appears at the top of the bottom, opposite the handle end, and the WAGNER is arched, with the W being for the company name and the WARE, and the SIDNEY O completes the name. The bottom is smooth. The number at the bottom is 1056 followed by what appears to be the capital letter I or a T, but looks more like an I. The number on the top of the handle appears to be a 6. Any idea on when this was manufactured? Its in very good condition, a beautiful deep smooth black color inside.

Hi there, Fred. Sorry to hear about your mother.
That sounds like a really great heirloom. I think that’s in the range from about 1924 – 1945. The “I” or “T” is probably denoting the casting mold in the factory.
I know you’ll keep that skillet in good shape! Cheers.

See the Lodge L5HS3 5-Piece Pre-Seasoned Cast-Iron Cookware Set at AmazonHi there
I have a Wagner skillet that measures 9 1/2 inches across the bottom and has pour spouts…but the Wagner name is very simple, not with the fancy W that i see the other vintage pans having. Also the O for ohio just has a . behind it ( O. ) like this. the pan has no number on the handle, just a 9 on the bottom of the pan. I wanted another, and can’t find any on the internet like it.
Now i’m curious about the approximate age and value of the pan?
thanks for your time,
Martha Mora

Hello I would like to know about how much a Wager ware -o- 1059 is worth ? it is in good condition we use it every day.

Hi Michelle, it is probably worth $30 – 75+. It all depends on the condition but you say it’s good. I have one just like it and love it! I just cooked up some bacon today.

I have a pan that I would like to sell … do not know how to price it … can you help please?
It is marked on the bottom “WAGNER” (straight), and the number 8. It has a silver color finish on the outside and handle (nickel plated)? I believe it is from the 1890′s based on my research.
Help please!!

Hey Ester – That sounds like a really nice piece of cast iron!
That sounds like a pre-1915 era piece..I agree.
How are you going to sell it? On eBay or privately?
If you are going to sell it on eBay I would probably just set the auction for 7 days with no reserve and an initial bid of $0.99. That will encourage the highest number of bids.
If you are going to sell it another way, I would monitor eBay for 2-3 weeks for the exact same item, if you can find it. Price it around 25% HIGHER than the maximum sale price you can find. That will give you some room to bargain if needed.

Oh, I’m guessing but it’s probably over $200+ and with the shiny finish it may be a little more.

I have a nickel plated “WAGNER” (straight) 8 pan and would like to know how much it is worth.
Any help out there?

My husband & I just picked up a Wagner while antiquing this weekend. The bottom says Wagner Ware (the W is shared) and says Sidney -O- underneath. At 6 o’clock it is marked with 1401 and a C underneath. The too side of the handle is shiny (nickel?) and also has a C. Can you please help me date this. Also we gave $25 for it. Did we overpay? Thanks!

Hey Jessica! Congrats on the purchase. Have you cooked anything on it yet?
I think you got a great deal! Well done! You got a good value and probably cheaper than you could have gotten on eBay.
Based on what you said, it’s probably from the mid 1920s to about 1959. it’s hard to tell exactly most of the time. The “C” denotes the specific cast mold that was used in the factory.
Hope that helps!

Thanks Billy! Your suggestions make sense!!
I am selling it for a client, so am not sure I comfortable without the reserve. Do you have any suggestions on that point? I have been monitoring and searching other sources, but to no avail.
Also, is that nickel plate? Do you want a pic??

The other thing you can do is just have the starting price at $200 and go from there. Maybe you can just set the price very high and if it doesn’t sell just keep lowering the price each week.
I’ve never done that but it would help to get the highest value…the downside is it would take many weeks.

Hi Billy I picked up a wagner dutch oven at a flee market for $40. It has “wagner” Sidney o on it. Wagner is arched and sidney is straight with an 8 at the bottom. From what I’ve managed to research I believe it to be 1915 to 1920 maybe? It has a lid also but not sure if its right. The lid has a thin handle on it with a inset grove in the middle of the handle. It also has the spikes on the inside of the lid. Was told by someone the lid may be lodge but have not been able to verify it. I have pictures but nowhere to post them. Thanks for any info.

I found a piece of Wagner Are Sidney -o- in my grandfather barn. I think it is a ducth oven no lid. Only # is 1268 stamped in it. Any idea of the age on this piece. Thank you.
Lynn

I have acquired a CI muffin pan (11 muffins) no holes at the ends and reads Wagner Ware B. There’s no number. Can you help me date this.
Billy, Thank you for providing this wonderful site!

There is a slight omission in the history when it comes to the dates and a serious one when it comes to the brothers. Milton and Bernard started making cast iron skillets in 1881 at their hardware store in Sidney Ohio and were joined a short time later by their brothers, Louis and my Great-great Grandfather William. The company was then known as “Wagner Hallow Ware” and changed the name to “Wagner Ware” ten years later. So while one could say that Wagner Ware was born in 1891, it was conceived a number of years before.
William and Louis’ involvement can not be forgotten as they were both key to making Wagner Ware a success through their financial assistance, industrial sense and business skills.

We have a Wagner Ware cast iron that doesn’t sound like any that I hear described. It simply says, Wagner Ware at the top. The W is used for both word with Wagner in an arc. At the 6′oclock poistion it says, “8 inch skillet” and under that it says Made in USA. Would you have any idea of the age of this pan and worth? It is silver finished on the inside. It also has a 5 on the handle.
Thanks –

I have two Wagner 8 skillets. One is 1058 with an x next to it. The other is a 1058 with a capital M underneath it. Any idea of the age? I use only Wagner and Griswold skillets for cooking. I love them.

Hey Billy, been wanting to contact you for a bit. My brother, sister, and I own a bungalow on the Jersey shore. After the Sandy debacle up here, our bottom floor was wiped out. Put back together again. My nephew cleaned the kitchen out, I got there and said ” where are all the pots and pans?” The answer was in the garbage. Yes the pots and pans sat in crap salt water for two weeks, but come on stainless steel and cast iron?! Forward, it took one week of every day of seasoning, but they are a dream now. If they think those pans are coming back to the house, HA.

My brother ( 70 years young said ” I remember Grandma cooking in those things”) I’m not selling, but any idea what they are worth?
Another question, I have new lodge pots, but with the course bottom, do you know what grit of sandpaper to use to make the bottom smooth?

Thanks for your time, Erik