Whether you want to fry some bacon, sear potatoes, sear a steak, bake a cake, or stir-fry vegetables, one cast iron frying pan is all you need.

One of the main reasons why people choose a cast iron skillet for cooking is because cast iron cookware can be used for almost anything. There a LOT more reasons why cast iron dominates in my kitchen, and kitchens across the country.

Here are some reasons why you should be cooking with cast iron:

If you are extremely health-conscious or at least somewhat concerned about living a healthy lifestyle, then keep in mind that when you use cast-iron skillets, you avoid all the harmful chemicals and toxins that are prevalent in non-stick pans. The repellent Teflon coating that keeps foods from sticking contains perfluorocarbons (PFCs), a chemical that has been associated with developmental problems, cancer and liver damage. These chemicals are released as the pans are heated or when the surface gets scratched, and we subsequently ingest the fumes into our bodies.

Although cast iron doesn’t leak chemicals into your food, it can allow iron to saturate whatever it is that you are cooking, and that is truly a benefit for those who are iron-deficient and looking for natural ways to boost their levels of the nutrient.

Iron deficiency is fairly common across the globe, particularly in women. As many as one in 10 American women do not receive adequate amounts of iron; if you are looking for a different way to add iron into your diet other than taking a vitamin or supplement, cooking food, especially an acidic food like tomato sauce, in a cast iron frying pan can increase the iron content by as much as 20 times.

Note that if you use enameled cast iron (the kind that is coated) then you won’t be getting the same dietary iron benefits. (Bare Cast Iron versus Enameled Cast Iron…) But even trace levels of nutrients can make a difference.

When cast iron is properly seasoned, it has a natural non-stick surface of polymerized oil and fat. Basically, it is fatty and organic materials that are carbonized and super slick. Now, some may claim that cast iron is just as non-stick as Teflon – I don’t agree. It can be really slick (see the video of me frying an egg below), but if you do something silly, then things can stick.

Cast iron skillets are ideal heat conductors. They have high heat retention, and those who swear by cast iron maintain that the food heats more evenly when compared to traditional pots and pans. The versatility of a cast iron skillet is unrivaled; you can use it on a stove, on a barbecue grill or even in your oven.

Now, I know that cast iron can get hot spots like any other cookware, but if you have an even heating source then you should be fine.

Because cast iron skillets hold heat for longer periods of time and heat up more quickly, you actually save a little bit of money in electric or gas heating costs, whichever applies to your home.

One thing to mention is that high heat retention has its price: It takes longer to heat up cast iron compared to, say, copper. For me it is worth it!

No Fear of Scratching

Cast iron doesn’t scratch, so you can use virtually any cooking utensil on it without worrying about damaging the pan.

Unlike most non-stick pans on which you need to use rubber spatulas or special spoons to cook the food, you can use metal spatulas, rakes, shovels or nearly anything on cast iron. It truly is virtually indestructible.

Ever wonder how Grandma’s cast iron skillet still looks the same as when she used it decades and decades ago? One of the wonders of cast iron is that it doesn’t warp over time when repeatedly exposed to high temperatures.

Many traditional pots and pans can lose their shape, as exposure to heat and use over time molds the shape of the pan, yet cast iron continues to look exactly the same.

To be perfectly honest, cast iron is warp resistant – I’ve seen an old skillet that had a bit of a warped bottom. It was an old Wagner 1058.

Cast iron skillets hold flavor for longer. In fact, while some people may be grossed out the remnants from Grandma’s meal may still be in the crevices of the pan from a luncheon held 35 years ago, it is for this reason that cast iron enthusiasts adore the cookware.

Many maintain that the flavors are held within the pan itself, so when you cook something new, you are still adding a little bit of the flavors that were there previously.

For better or worse, cooking with cast iron can ensure a different flavor experience each and every time.

If you do not own a cast iron frying pan, it is well-worth your time and money to invest in the cookware. I see some of those premium brands, like All-Clad, and it blows my mind how expensive it can be (link to Amazon).

You can often find sales on the internet, and most stores carrying cast iron skillets that are pre-seasoned and ready to use. You can typically expect to spend fewer green-backs on a cast iron skillet, depending on the size, while you may be looking at considerably more for the same-sized stainless steel pan (See pricing at Amazon).

I see great deals for Lodge cookware at Walmart and many outdoor stores. When you think about how durable and versatile cast iron is, it is amazing that you can get cast iron so cheap!

One of the main reasons people enjoy cooking with cast iron is that it is versatile – you can use these pans for baking, stir-frying, searing and deep frying. I have been on a kick where I bake pizza in cast iron and I am loving the crust.

Before the slow cooker ever existed, grandmothers around the world used cast iron Dutch ovens for all of their cooking.

Dutch ovens, used for hundreds of years, are notorious for cooking if you want an even temperature. Even better, a Dutch oven can go from stovetop to oven without missing a beat. It doesn’t get much easier than that.

Remember that cast iron can last for three generations or longer. Ever have a family fight or know of someone who desperately wanted Grandma’s pans after she passed?

Anyone who is anyone in the cooking world knows and appreciates the importance of a good cast iron skillet. If you don’t know of anyone in the family who is passing one down anytime soon, you can find vintage cast iron pans at a local flea market, thrift store, online auction site, and garage sales.

While you may worry that because these have already been used, they are disgusting and not worth the dollar you might spend, cleaning and restoring cast iron is relatively simple.

Did you know that cast iron frying pans are also healthier than non-stick pans? The lovely sheen that you see in the skillet is the sign of a well-used and well-seasoned pan, which translates into non-stick as well.

Fortunately, however, you will not need to use heaping amounts of oil to sear chicken or brown crispy potatoes while cooking with cast iron. In fact, if you use cast iron skillets regularly, you often don’t need to add any extra ingredients before you begin to cook. 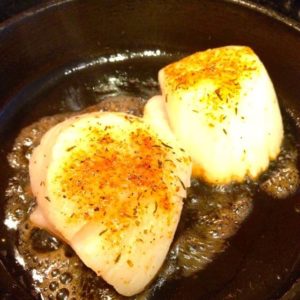 Cast iron skillets are great in the kitchen and extremely versatile, but what about cleaning? Even for the most troublesome spots and caked on grease, oatmeal can do the trick, believe it or not.

While all you really need is a scraper to clean cast iron, if that isn’t working, you can sprinkle some oats on it and add a little water. The paste will absorb the leftover grease without stripping the pan of iron. However, if you are one that holds fast to the notion that the leftover flavors simply add to the next meal, cleaning a cast iron skillet truly is a breeze.

So Get Yourself Some Cast Iron

While cast iron may seem like an old-fashioned choice, this reliable cookware should be a staple in your modern kitchen. Please don’t throw away that old cast iron pan that has been passed down to you from generations.

As long as it has no major cracks, you can clean, season and use the pan for every single one of your cooking needs.

Cooking a steak? I’ve got some ideas about the best cast Iron skillet to use.

29 thoughts on “Why Cook with Cast Iron”

Leave a Reply to Doug @ The Kitchen Professor Cancel reply