Most of us are probably familiar with fudge—from the shelves of touristy stores nationwide to the dessert trays after millions of holiday dinners, fudge is a uniquely American treat. I recall a bicycle trip between the peninsulas of Michigan, when we passed the town of Mackinaw. Literally, the entire town sells fudge. They sell fudge in fudge stores. They sell fudge in gas stations. They sell fudge everywhere. It is the fudge capital of the world.

In a hurry? The best saucepan I found is the Demmex Hammered Copper Saucepan at Amazon.

Clearly, there is a nearly insatiable market for fudge. This decadent distillation of milk, butter, cocoa, and sugar is one of the most divinely indulgent delicacies of modern times. Just a few ounces of this stuff can well exceed 500 calories!

Many of us use the word ‘fudge’ as a verb, meaning to ‘fit together in a clumsy fashion.’ Interestingly, this usage is considerably older than the chocolaty treat. The Oxford English Dictionary suggests this has been a regularly used word since the 18th century. This verbal usage appears to have little to do with inception of the confection: fudge was allegedly introduced to a national audience through its generational treatment at Vassar College (a famously prestigious college, unlikely to condone much ‘fudging.’).

Around 1890, a student at Vassar, named Emelyn Battersby Hartridge, introduced fudge to the graduating class after making it based off of a Baltimore-area cousin’s recipe. Ever since, fudge has been uniquely associated with Vassar College (sorry, Mackinaw). In fact, there is even a simple, 4 ingredient recipe for Vassar Fudge.

If you want to properly melt your own chocolate, you’ll need a double boiler. Find some awesome options here.

Fudging it in your own kitchen

There’s nothing unusual about the Vassar fudge recipe—in fact, it’s so simple that fudge has come to be one of the most ubiquitous indulgences in the United States. I’ve never been in a candy store that didn’t sell fudge. You probably haven’t been, either!

Because most recipes, such as the Vassar standard, involve few, easy-to-find, cheap ingredients, it is a favorite for home production. Additionally, because fudge contains a minimal amount of dairy, it can last over a week at room temperature. Put it in the fridge, and it’s good for at least a month!

Making fudge is easy, cheap, and FUN. However, like many kitchen endeavors, an often overlooked consideration is the pan in which you’ll cook. Of course it’s important to select fresh, quality ingredients, but equally important is the cookware that you use.

The most important consideration for a fudge making pan (or for heating any sugar) is the heavy bottom. For the casual fudge maker, the evergreen options of stainless steel or anodized aluminum will suffice, but a dedicated fudge maker should invest in copper. Copper has heat retention and distribution on par with cast iron, but it heats up and cools down much faster, making it better for fudge and other candy making. Also, this even heat distribution prevents irksome sugar crystallization, which can ruin your batch.

Additionally, you’ll likely want high, straight sides, which prevent bubbling mixtures from sputtering onto your stovetop. Ideally, something that has a capacity twice as voluminous as what you are preparing is best for preventing a big mess. Prefer a pot instead? Find the best fudge pots here.

Now that we have a rough idea of what to look for, let’s take a look at some of the best saucepans for making fudge. 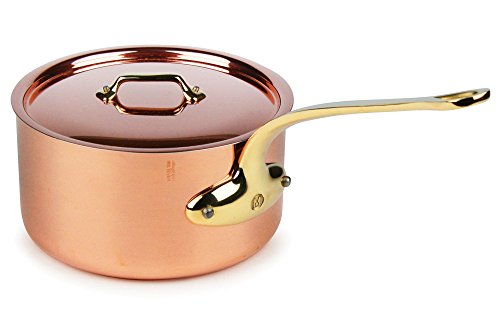 The Mauviel M’heritage 250B Copper Saucepan is as good as any fudge-making saucepan can be. Its generous 3.6-quart capacity ensures that you can make large batches without sputtering hot fudge soiling your stovetop. The nearly 3-milimeter thick base prevents overheating. The bronze handle, featuring an eyelet for attractive wall-hung storage, has a higher density, meaning it won’t get as hot as the pot.

While most fudge production doesn’t require the use of a lid, the included lid will make this pot extremely versatile, for uses well beyond fudge. As copper is not cheap, this pot is available in smaller (and therefore cheaper) sizes. Like all Mauviel products, this pot is made in France and comes with a lifetime warranty. 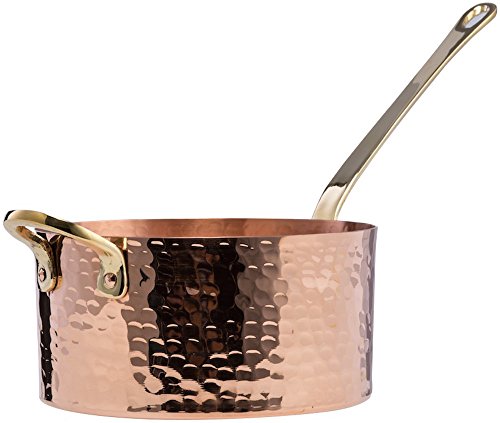 The Turkish-made Demmex Sugar Sauce Zabaglione Pan is a more affordable alternative, which maintains the sought-after copper for all sorts of sugar chefs. This pot boasts a nearly 2 quarts capacity, which is still plenty for a batch of fudge for the home. Featuring no lining or lacquer, this saucepan is nothing but high-grade, hand-hammered copper. Its hammered texture is a graceful aesthetic addition to any kitchen that performs as well as it looks.

The solid brass handle and handle helper assure the easy, burn-free transport of the pot when heated. At a fraction of the cost of the Mauviel model, this is a fantastic copper option for the discerning fudge chef. 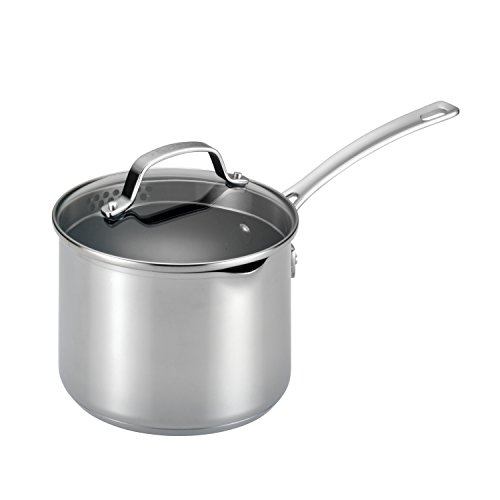 For the budget-conscious fudge chef, the Circulon Genesis Hard-Anodized Saucepan is a dependable, affordable alternative to its more cosmopolitan, copper counterparts. This saucepan features the same high, straight sides as the more expensive competition.

The solid anodized aluminum construction ensures an even, non-burning heating surface, perfect for fudge and candy making. Its 3 quart capacity is perfect for any size fudge operation, and the included lid makes this saucepan versatile and perfect for all sorts of cooking, well beyond the heating of fudge.

Now that you’ve got an idea of what it takes to properly cook up a tasty batch of fudge, you can start making this tasty treat for you and everyone in your life to enjoy. From Vassar to Mackinaw to your own kitchen, find this velvety indulgence in a saucepan near you!